A program is simply a series of instructions that tell the computer what to do. Although programs can be complex, each individual instruction is generally simple. The computer starts at the beginning and works through, line by line, until it gets to the end. Here are some of the essential elements in Visual Basic:

The Visual Basic IDE is a safe environment in which to experiment and learn from your mistakes.

Statements
A statement is an instruction that performs an action. For example, the statement Lbl.BackColor = Color.Blue sets the background color of Lbl to Blue.

Functions
A function is a statement that returns a value. For example, the function InputBox() returns the value of its dialog text field.

Variables
A variable is a word defined in the program that stores a value. For example, the statement msg = “Hello World!” stores a string of characters in a variable called msg.

Objects
An object is a program “building block” entity. It can be visible, like a Button control, or invisible like a Timer control.

Properties
A property is a characteristic of an object. For example, the property Btn.Text is the Text property of the Btn object.

Methods
A method is an action that an object can perform. For example, the method Btn.Click() is the Click method of the Btn object.

Comments
A comment is an explanatory line in the program code starting with an apostrophe ’ character. It’s not actually read by the compiler but exists to explain the purpose of the code. For example, ‘ Clear the list. might explain a Clear statement.

The illustration below shows the Code Editor view of Visual Basic programming code, for the Click event-handler of a Button control – line numbering is turned on to aid analysis of the code. 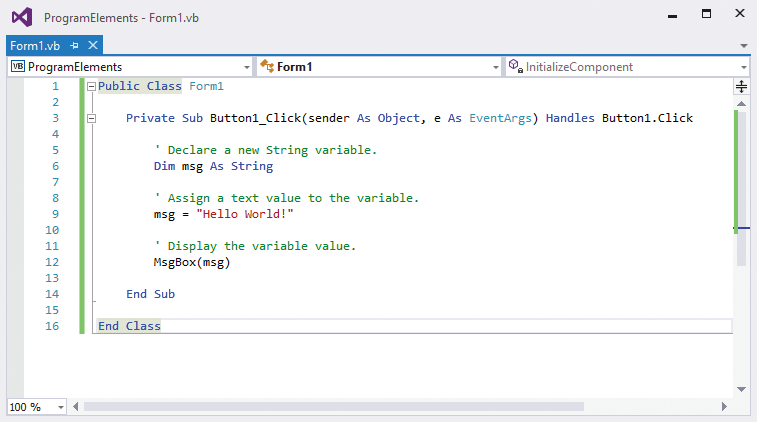 The syntax colors shown here are the default colors. Custom colors can be chosen in the Tools, Options dialog, by expanding Environment, Fonts and Colors.