Although not up there with the widely popular Samsung Galaxy smartphone, or the iPhone, in all it’s forms, the Windows Phone is one step closer to joining the club. As noted by MSPowerUser, Facebook Messenger – the MSN of the Social Media age – is now available through the Windows Store. Currently available in France and Germany, rollouts are expected to commence soon making the app available in the majority of countries around the world.

This addition comes following the announcement of Facebook launching a new Instagram, Facebook and Messenger App for Windows 10 and the Windows Phone, and is brilliant news for all Windows Phone users. This improvement is also a big step towards more app availability and engagement for the Windows Store, as the Facebook umbrella also includes popular messaging service WhatsApp.

If you temporarily change your Windows Store region via the settings, you can download the app through My Library, and then change the region back!

The Windows Phone Facebook Messenger App is still in its preliminary stages in terms of user testing, so don’t worry if you come across some glitches. Even in Beta mode though, the app has useful functionality including group messaging, photos and videos, emojis, stickers, nicknames, GIFs, notifications and much more. The Windows Store Messenger App has been adapted from the iOS version, so it will likely be quite similar to the iPhone service.

Unfortunately though, this development makes only a small amount of difference for App availability through the Windows Store. Most big names are covered, and more added regularly, but in comparison to Android and the Apple App Store’s millions of apps, the Windows Store is lacking. Microsoft have made some large changes surrounding Windows 10 Mobile recently, including cutting around 2000 jobs from their Nokia sector of the smartphone division, suggesting a more streamlined smartphone approach is on the horizon.

All is not lost though, as positive developments are still being made to the Windows Phone and the Windows Store (including rumors of a Surface Phone), so now at least, you can join the chat on the Facebook Messenger App! 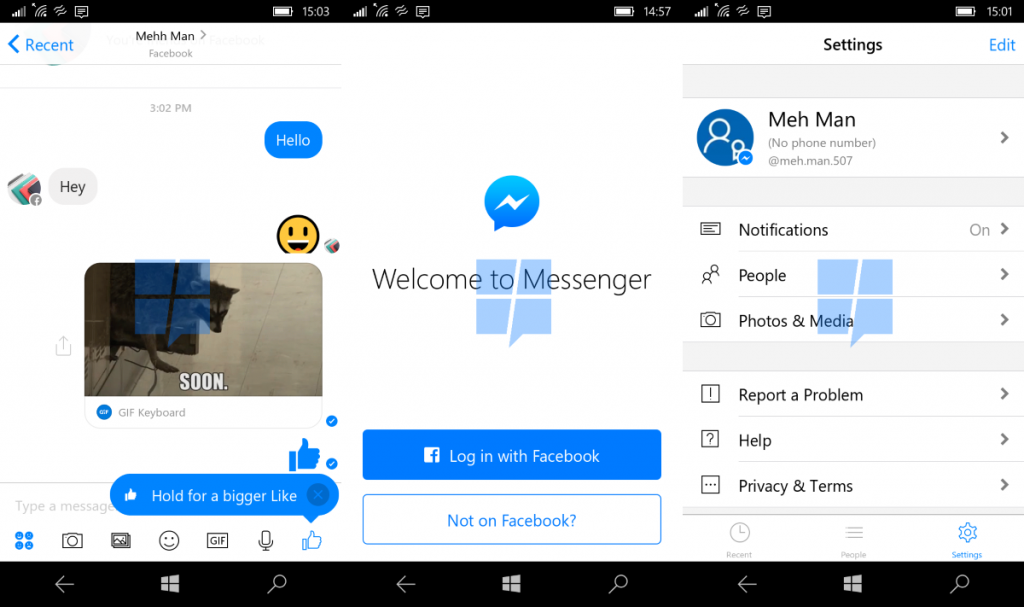