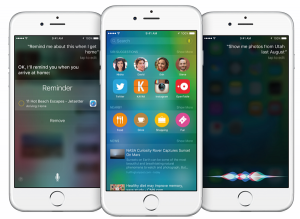 As many iPhone users will be aware, each time a new iOS upgrade is released, one of the things everyone is hoping for is improved battery life. With iOS 9 on the horizon and a selection of great improvements across the board, that might just be a possibility!

At WWDC 2015 this week, Apple revealed the new features to their iOS upgrade coming with the next generation iPhones available in September 2015.

First off is the more intuitive Siri, now with a wider range of topics and more accurate answers. Rivalling Google, the personal assistant has learnt all about context. For example:

Appointments suggestions have been added in line with the Calendar, as well as intuitive functions such as bringing up the Now Playing screen when you’re at the gym with your headphones in, or an Audio book when your iPhone is plugged into your car. The search feature will also incorporate your contacts, emails, apps and more, so if a friend messages you, Siri can bring up your calendar to show when you are next meeting up! 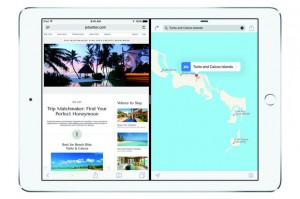 Designed for newer iPad tablets, iOS 9 features a whole new multitasking upgrade which supports Split View, Slide Over – which brings another app from the side of the screen, i.e. notes or text – and Picture-in-Picture mode. Unfortunately, Split View is only available for iPad Air 2, and Slide Over and Picture-in-Picture are only compatible with more recent iPads, Air, Mini etc.

Apple Pay has now been updated for use in the UK, coming this autumn. It will be supported by over two thirds of credit and debit card issuers including HSBC and Lloyds. The US version has been a huge success and will continue to integrate with store-issued cards and rewards, and because of this, Apple has renamed Passbook to Wallet, where Apple Pay will live.

Luckily, Apple have now made the iOS 9 upgrade less demanding on storage, needing approximately 1.3GB of internal space. Compared to the huge 4.5GB of iOS 8, this is great for the users of the smaller GB iPhones, as a mass deletion of photos, videos and music shouldn’t be necessary. Security and keyboard updates have also been applied, with improved cursor control and added shortcuts.

As well as these specifics, Apple is promising;

And finally, after improvements to efficiency across the whole iOS spectrum, there is now a new ‘Low Power’ mode available. This means you can extend your texting, gaming, Facebook-ing and whatever else you want to do by up to an hour before charging is needed. Let’s hope this grows with future updates!

So which of my devices will support iOS 9?

The general thought is if it ran iOS 8, it will run iOS 9 (but not all features). Here’s the official list:

To find out more, visit http://www.apple.com/ios/ios9-preview/