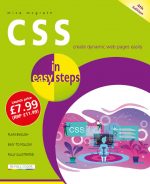 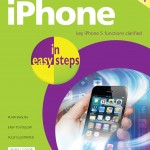 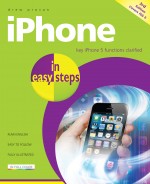 Click here to view Table of Contents and sample pages

iPhone 5 was launched by Apple in September 2012. With iPhone in easy steps, 3rd edition at hand, you’ll be whizzing through all the new features of the latest Apple iPhone sooner than you know it!

iPhone 5 is thinner and lighter than the iPhone 4S, the back and sides being made of a single piece of aluminium rather than glass, so it’s much more durable.  The iPhone 5 is 18 percent thinner and 20 percent lighter than the 4S.  It’s taller but not wider, so it’s still easy to use in one hand, and it has been re-designed to include a 4 inch Retina display, so more apps can be viewed on each screen. It has an Apple-designed chip, making its performance twice as fast as the 4S, and giving significantly better battery life.  The iSight camera has more features, including an option which lets you take panoramic photos in one smooth motion.  A new FaceTime HD front facing camera makes FaceTime calls clearer and can also be used for self portraits and recording HD video. There’s also improved stabilization when recording video and the ability to take still shots whilst recording.  iPhone 5 also allows you to share photos using iCloud’s Shared Photo Stream.  It comes with a new connector that is smaller, smarter and more durable than the connector on previous versions of the iPhone.

iPhone 5 comes with a new operating system, iOS 6, which includes:

iPhone in easy steps, 3rd edition covers iPhone 5 and iOS 6 and will help you get to grips with your new iPhone in no time.

Drew Provan is currently a senior lecturer at Queen Mary's School of Medicine and Dentistry. He's also a keen iPhone user. Drew enjoys writing and editing and has been involved with the production of a number of medical books. He also writes for GP Magazine, and have written pieces for other publications including Financial Times, Tesco Healthy Living, Readers Digest, and patient support group publications.

Drew uses technology extensively at home and at work, for creating music, reading, writing, databases and giving presentations. As an early adopter of the iPad he has almost stopped using his laptop and switched over to the iPad for most of his computing and multimedia needs.

Upgrading and Fixing a PC in easy steps, 3rd Edition£10.99