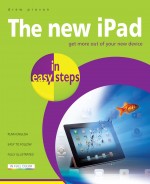 The New iPad in easy steps helps you make the most of the 3rd generation of the iPad, launched in March 2012, including its key new features, which are:

Four times more pixels than iPad 2. Razor-sharp text. Richer colours. The Retina display transforms the entire iPad experience. So everything looks and feels incredibly lifelike and perfectly detailed.  The Retina display on the new iPad features a 2048-by-1536 resolution, 44 percent greater colour saturation, and 3.1 million pixels — in the same 9.7-inch space. That’s four times the number of pixels in iPad 2 and a million more than an HDTV.   The new and powerful A5X chip drives power to every one of the 3.1 million pixels in the display and its quad-core graphics processing makes everything you do on iPad feel incredibly responsive. From the little things like swiping, scrolling, and pinching to the big things like editing photos in the new iPhoto, applying titles and transitions in iMovie, and, of course, playing games.

Instant on. Touch and go

Each time you press the Home button or open the Smart Cover, it’s ready to go, instantly. That’s the work of flash storage. It’s fast and reliable, so you can get to your apps and do whatever you need to do, pronto.

Built with the latest in wireless technology, the new iPad lets you connect to fast data networks around the world – up to 4G LTE.  The new iPad offers the most comprehensive support for networks around the world. It’s designed with cellular antennas that access a larger frequency spectrum. That means you can get online almost anywhere you. You can even pop in a local SIM card to get a connection when you’re travelling.

iPad as a personal hotspot

Share the high-speed data connection on your iPad. If your carrier supports it, iPad can act as a personal hotspot for connecting up to five devices — such as a MacBook Air, an iPod touch, or another iPad — over Wi-Fi, Bluetooth, or USB.

iCloud stores your music, photos, apps, mail, contacts, calendars, documents, and more and wirelessly pushes them to all your devices.  So if you buy a song, take a photo, or edit a calendar event on your iPad, iCloud makes sure it appears on your Mac, iPhone, and iPod touch, too.

Write an email, send a text, search the web, create a note and do it all with only your voice. Instead of typing, tap the microphone icon on the keyboard. Then say what you want to say while your iPad listens. Tap Done and, just like that, your spoken words become written words. Dictation also works with third-party apps, so you can do things like update your Facebook status or share a thought on your Twitter feed.

The App Store is home to over 200,000 apps and counting — all made just for iPad, many of them free.   Apple’s beautiful iPhoto app on the new iPad is just one of thousands of apps that let you do things with iPad you never thought possible. With iPhoto in the picture, the iLife family of apps for iPad — including GarageBand and iMovie — is complete.

Whether it’s the new album you bought, photos of your Barcelona escapade, or an HD movie, AirPlay lets you stream wirelessly what’s on your iPad straight to your speakers and HDTV.

The New iPad in easy steps is ideal for navigating your way through the myriad features offered by this sleek device.  It starts by showing how to optimize your settings so your new iPad functions exactly how you want it to.   Then, it covers all you need to know: emails, web browsing, photos, music, videos, maps, games and iBooks, to running presentations, using apps, syncing with other devices, reading and writing documents.  The book includes tips and tricks and even features not widely publicized by Apple.   Use The New iPad in easy steps to ensure you're getting the most of your new iPad.

Drew Provan is currently a senior lecturer at Queen Mary's School of Medicine and Dentistry. He's also a keen iPhone user. Drew enjoys writing and editing and has been involved with the production of a number of medical books. He also writes for GP Magazine, and have written pieces for other publications including Financial Times, Tesco Healthy Living, Readers Digest, and patient support group publications.

Drew uses technology extensively at home and at work, for creating music, reading, writing, databases and giving presentations. As an early adopter of the iPad he has almost stopped using his laptop and switched over to the iPad for most of his computing and multimedia needs.

Click on the links below for free PDFs to get you started while you wait for your book to arrive:

How to find your way around The New iPad

How to search for something in The New iPad

How to make folders in The New iPad

How to multitask in The New iPad

How to make corrections on the New iPad

How to obtain an Apple ID