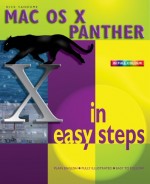 The original OS X created a new standard for stability and ease-of-use for an operating system on the Mac. The latest version, OS X v10.3 Panther, raises that standard even higher with an OS that is fully adapted to an interactive digital lifestyle. Whether you want to edit digital images, create your own movies, conduct video messaging or organize your online schedule, OS X Panther can handle all of these things, and much more, with ease, simplicity and style.

Mac OS X Panther in easy steps initially takes a detailed look at the operating system and how to get the most out of items such as the Dock and the redesigned Finder. It also looks at working with, and organizing, files and folders with the new Exposé feature.

The book then looks at some of the applications that can be used with OS X, including the iLife suite of iPhoto, iTunes, iMovie, and iDVD, and new features such as iChat AV, iCal, iSync and Rendezvous. System applications are also covered, to show how to get the maximum productivity from OS X. The final chapters look at issues such as working with multiple users, printing, troubleshooting and more advanced features such as networking and using AppleScript.

Overall, OS X Panther in easy steps shows how to use a program that manages to pull off the trick of being a joy to use while providing revolutionary power and versatility.