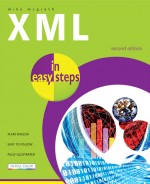 XML in easy steps instructs you on how to employ XML data documents. It is completely updated from the first edition of this title, which described the emerging XML technologies, to demonstrate those parts of XML that have become popular in today's real-world applications. Clear step-by-step instructions are provided to explain each aspect of XML, and screenshots illustrate every example.

XML in easy steps describes the eXtensible Markup Language(XML), together with the associated technologies of Document Type Definition (DTD), XmlSchema Documents (XSD), and the eXtensible Stylesheet Language (XSL). It illustrates how XML can be used to create Scalable Vector Graphics (SVG), how to access XML data with JavaScript, and how to deploy XML in modern AJAX web applications. You don't need to have previous knowledge of any markup language so it's ideal for the newcomer to XML. By the end of this book you will have gained a sound understanding of XML and be able to create your own well-formed XML documents and validating schemas.

XML in easy steps has an easy-to-follow style that will appeal to anyone who wants to begin using XML. It will appeal to programmers who want to quickly add XML to their skills set, the enthusiast who wants to explore the possibilities of XML, and to those seeking a career in web development who need an understanding of XML.