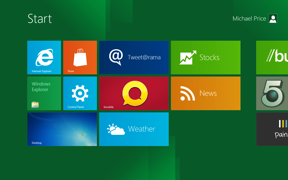 Windows 8 is the next version of Windows.

Microsoft have already released a Developer Preview and the initial Beta version is due shortly. Windows 8 features the new Start Screen which replaces the Start menu and displays active tiles with the new Metro Apps that are being. You will be familiar with this type of interface if you use a Smartphone such as Windows Phone (which incidentally is also a member of the Windows 8 family).

If you are currently running Windows Vista or Windows 7, or planning to upgrade your existing system to Windows 7, the same configuration will run Windows 8.
For a conventional desktop or laptop PC, the requirements are:

On these systems, Windows 8 will run your existing desktop applications, such as Microsoft Office and Internet Explorer, and it will also support the new Start Screen and the Metro Apps, with the mouse or keyboard being used to perform the same action that are supported via the Touch functions on the Tablet PCs.
You can therefore be ready for the launch of Windows 8 in the fourth quarter, without having to switch the new class of Windows 8 PCs that are currently under development.
You can go one step further and add a Touch-sensitive monitor to your desktop computer (or use a Windows 7 laptop that supports Touch). However, most existing displays are limited in the level of Touch capability offered and so would not be fully Windows 8 compliant.

The Windows 8 interface comes into its own when used with touch-based, tablet or convertible PCs, in particular the Windows on ARM (WOA) PCs that use the ARM processor rather than Intel or AMD.

These PCs are still under development, but they will feature additional hardware requirements including: