The C language has been around for quite some time and has seen the introduction of newer programming languages like Java, C++, and C#. Many of these new languages are derived, at least in part, from C – but are much larger in size. The more compact C is better to start out in programming because it’s simpler to learn.

It is easier to move on to learn the newer languages once the principles of C programming have been grasped. For instance, C++ is an extension of C and can be difficult to learn unless you have mastered C programming first.

Despite the extra features available in newer languages, C remains popular because it is versatile and efficient. It is used today on a large number of platforms, for everything from micro-controllers to the most advanced scientific systems. Programmers around the world embrace C because it allows them maximum control and efficiency in their programs.

In C programs the code statements to be executed are contained within “functions”, which are defined using this syntax format:

After a function has been called upon to execute the statements it contains, it can return a value to the caller. This value must be of the data type specified before the function name.

A program can contain one or many functions but must always have a function named “main”. The main() function is the starting point of all C programs, and the C compiler will not compile the code unless it finds a main() function within the program.

Other functions in a program may be given any name you like using letters, digits, and the underscore character, but the name may not begin with a digit. Also, the C keywords, listed in the table on the front inner cover of this book, must be avoided.

The ( ) parentheses that follow the function name may, optionally, contain values to be used by that function. These take the form of a comma-separated list and are known as function “arguments” or “parameters”.

Traditionally, the first program to attempt when learning any programming language is that which simply generates the message “Hello World”.

Step 1: Open a plain text editor, such as Notepad, then type this line of code at the start of the page, exactly as it is listed

The program begins with an instruction to the C compiler to include information from the standard input/output stdio.h
library file. This makes the functions contained within that library available for use within this program. The instruction is more properly called a “preprocessor instruction” or “preprocessor directive” and must always appear at the start of the page, before the actual program code is processed.

Do not use word processor applications to create program code as they store additional formatting information that prevents code compilation.

Preprocessor instructions begin with a # hash character and must enclose standard library names within < > angled brackets.

Whitespace between the code is ignored by the C compiler but program code should always end with a newline character.

This function declaration specifies that an integer value, of the int data type, should be returned by the function upon completion.

Step 3: Between the braces, insert a line of code that calls upon one of the functions defined in the standard input/output library – made available by the preprocessor instruction

Here the printf() function specifies a single string argument between its parentheses. In C programming, strings must always be enclosed within double quotes. This string contains the text Hello World and the \n “newline” escape sequence that moves the print head to the left margin of the next line.

Step 4: Between the braces, insert a final line of code to return a zero integer value, as required by the function declaration

Traditionally, returning a value of zero after the execution of a program indicates to the operating system that the program executed correctly.

Step 5: Check that the program code looks exactly like the listing below, then add a final newline character (hit Return after the closing brace) and save the program as “hello.c”

Each statement must be terminated by a semi-colon character.

The complete program in text format is now ready to be compiled into machine-readable byte format as an executable file.

This is an extract from C Programming in easy steps, 5th edition, which is due for publication mid-November (you can register to be notified when it’s available here), but if you can’t wait for the print version, ebook versions are available NOW from our online shop, Amazon (Kindle), Apple (iBooks), Google Play, Kobo and Nook. 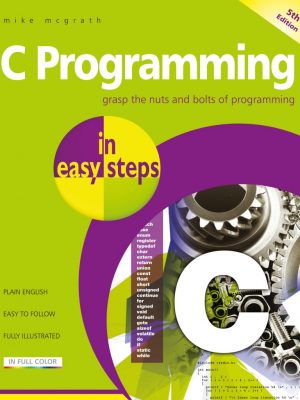 This popular title, which is ideal for the newcomer to computer programming, has been updated to cover the GNU Complier version 6.3.0 and Windows 10.

It begins by explaining how to download and install a free C compiler so that you can quickly begin to create your own executable programs by copying the book’s examples. Each chapter builds your knowledge of C, and there’s even free, downloadable source code available for you to check your work against.

You need have no previous knowledge of any programming language.